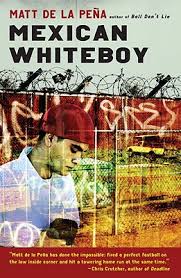 1. What masks’ do Danny and Uno have to wear?

The mask that Danny wears changes throughout the book and some of the masks’ become more in depth and help you understand the character more. At the beginning of the book Danny wears the mask of silence and the man box.  Danny never talks and doesn’t question anything just goes with the flow and I think that was because he didn’t feel like he could talk to anyone because he didn’t think he was Mexican enough for his dads family, and wasn’t white enough the kids at his prep school.

The mask that Uno wears is the man box.  During the first derby that Danny was in the bat hit Uno’s brother in the face, and that made Uno go into protect mode and made Uno step to Danny.  And I wonder if it was someone else someone that Uno knew and accidently did that to Manny would Uno have reacted another way? Uno also never talks to anyone about the emotional things that are happening to Uno for example he doesn’t talk to anyone about the things that are happening with him and his little brother besides Sofie.


2. Use the concepts of socialization to explain the book “ Mexican Whiteboy”.

The book “Mexican Whiteboy” is a book the life of a kid and how he connects to himself and how society has shaped the lives of two boys, Danny and Uno.  This book shows how a boy (Danny) has come to think of himself as an outcast because of the ways people have portrayed him. He has been portrayed this way because he feels like he can’t connect to anyone because he thinks that he isn't Mexican enough for his dads family or white enough for his moms side or the kids within his prep school. It also talks about this kid named Uno who is half black and half mexican.  It shows how a boy has been socialized to be this fighter who has to protect and can’t show any emotion to anyone no matter what.


3. What new insights did you gain about race and economic class in reading this book?

Do you think that children are more accepting to their same sex parent? After hearing this I went home and almost immediately I thought that the answer to this is no.  I think that children are more accepting to the parent that is there for them the most, and a lot of the time this happens to be the same sex parent.  I connected this to my mom and I.  Even though my mom isn’t the same sex I still feel more connected to her than I do my dad. I think that this is because she is there for me the most.

In our seminar we talked a lot about how the mexican people were racist against Uno because he was black. I connected this to our small town and in some of the restaurants colored people are usually in the hot kitchen doing all the work, while the white people are out working the register. I think that this is wrong because people are judging other people just for being a different color or skin.

I feel like I did well when stating my opinion.  Because every time I talked about how I felt about whatever we were talking about or why we think that happened.  During our next seminar I think that I need to speak more and invite people to join in to the seminar. I need to do this so I am more engaged in our discussion, and be more inviting so people can state their opinion and share their thoughts.